​ Protecting the Public from Ballistic Violence where they ​​Work, Learn, Live, and Play

What is REVOLUTION SHIELD® and why is it such an important new layer of physical security protection for the public space?  The answer is simple...its both a table ​and a revolutionary life-safety device!
​
Amulet is proud to partner with PS Furniture, a leader of innovation in the contract furniture space, to introduce the world's lightest bullet and blast-resistant table with Amulet®Ballistic Barriers hidden inside.  What makes it even more exceptional?  Its ability to instantly 'transform' into a protective wall, shielding users from sudden ballistic violence.  Now, the most common of furnishings - used in schools, hospitals, courtrooms, offices, security screening checkpoints and elsewhere - can now also protect life should the unthinkable happen.

Amulet Protective Technologies and Arconas are pleased to announce their first installation of bullet- and blast-resistant airport furniture. Arconas Flyaway tandem seating with Amulet® Ballistic Barriers are designed to shield travelers in the event of an act of violence in the public space. The seating has been installed in the new Brownsville/South Padre Island International Airport terminal which opened to the public on January 20, 2021.

Security Experts are often Tasked to Help Mitigate Loss of Life and Injury by 'Hardening' the Facilities ​they Protect
But Where Do They Turn for Design, Budgeting, Implementation and Support?
Amulet's Full Suite of Security Technology and Expertise Can Help
​
From Security Assessment and Planning to Architectural Design, Project Management, Installation and Support.
Amulet Can Help You Do It All!
Need To Harden Your Facility?  Let us know by clicking here

ASSA ABLOY, the global leader in access solutions, has launched a state-of-the-art UltraLight Bullet Resistant Door System capable of stopping a full spectrum of bullets - from handgun to rifle - at less than half the weight of conventional bullet resistant doors.
Learn More About Assa Abloy's Newest Bullet Resistant Door
​​AMULET INTERCEPT™
Introducing the Next Generation of Ballistic Detection
Amulet has merged the physical protection of award winning Amulet®Ballistic Barrier technology with the ability to autonomously ​​detect, locate and notify First Responders of an Active Shooter or Blast event...all within seconds.

Physical screening at Security Checkpoints is a key component of Access Control.  ​ While much thought is put into the technology and practices utilized to detect the presence of contraband, including weapons, virtually no effort has been made to protect front-line security personnel from sudden ballistic violence...until now.

Amulet Screen Defender™ is a ballistic barrier system designed to physically protect life from a full spectrum of gun-fire as well as blast fragmentation.   With the introduction of Amulet® Ballistic Barrier technology to the security screening process, a new layer of physical protection is now available to mitigate loss of life and injury should the unthinkable happen. 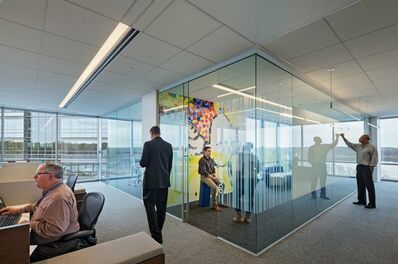